Cooking that's "in the bag" 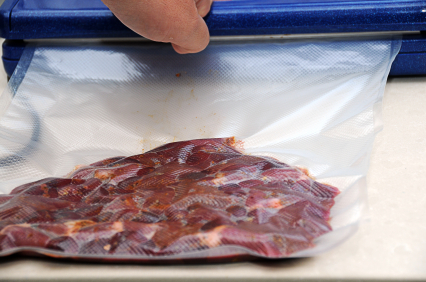 How sous vide cooking gives more flavour to a meal
I have been following a televised cooking competition over the summer in which a lot of young aspiring chefs are using a method of cooking that is known as sous vide. I was intrigued by that peculiar method of preparing a meal, so I decided to do some research on it.

Preparing the meal in the bag:
Sous vide, is a European technique and it literally means “under vacuum”. The process consists of placing food ( for example, a piece of fish or red meat) with all its seasonings, and cooking it slowly by putting it in air sealed bag that is then placed in hot water. You might have used a similar method before called poaching. When you poach a fish for example, you prepare the meat first, by removing the bones and skin using a knife and your kitchen cutting board, you season it with herbs and lemon, place it in a piece of aluminum foil, and slowly cook it in the oven.

Hot water bath for the bag:
Sous vide is similar to that technique, but it has its own advantages. Since the temperature of the water in which the food is cooked is lower than the final cooking temperature (about 60 °C or 140 °F), over cooking is avoided and the food keeps more of its original texture, flavour and juices. The meat is tender and the vegetables are crispier. However, this technique is not perfect. High heat cooking like searing or grilling may sometimes over cook the meat, but they leave a nice crisp texture that some people might enjoy. It is possible to obtain this texture with sous vide cooking, but the meat has to be grilled after it has been cooked in the bag for a prolonged period of time.

Air sealing the food in the bag is not necessary when cooking with this method. It is preferable to use it if the meal is to be frozen after it is cooked. Sous vide cooking is becoming more available to “at home chef” with small kitchen appliances that boil the water at the precise temperature to slowly cook the food in a plastic bag.